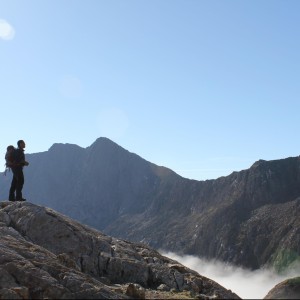 As you step off the plane the warm air hits you and the feeling of being on holiday washes over you except this time you’re not here for calm beaches and cocktails by the sea. You’re here because you have a job to do.

Passport control, bags collected, money exchanged and you’re ready to go. Name spotted on a board in the hands of our guide and we’re bundled into a taxi and we’re off.

As the sun goes down we’re heading straight for the mountains in the distance, the sky orange and the silhouettes of the Atlas mountain’s growing darker by the minute.

The road to the village of Imlil was not as bad as we had been led to believe or perhaps the views and scenery distracted us from the bumps and bends in the road up to the mountain village.

Nestled in the mountains Imlil is a bustling and lively little village and although now dark the village is still busy. Our taxi stopped next to our mule, our muleteer emptied the boot and loaded the mule and off we went.

A short 30 minute walk up from the village to our bed for the night. A Berber gite in the next village of Aroumd. Trekkers and mules passed us on their way back down to Imlil as we ascended a short way up the hillside.

The star lit sky and the sense of adventure was exciting and gave a glimpse of what was ahead of us. On arrival at the gite dinner was ready. Traditional homemade fresh tagine which, tasted amazing. A quick chat with our guide and bed!

Rucksacks packed, mules loaded and we were ready to go. Luckily our 30 minute walk during the previous evening was en route to the Refuge du Toubkal, bonus! The path continues through the village and crosses what appears to be an old river bed, it is here the ascent begins.

The dusty sandy path zig zags up the hill side and heads into the mountains. Every so often a small shack selling bottled water and snacks appeared as well as a glimpse of the peak itself. Jebel Toubkal still appeared to tower above us and seemed a long way off especially as we were due up there the following day.

We reached a huge white boulder which marks the shrine of Sidi Chamarouch (2340m) and by huge I mean the size of a house, we were half way! Abdul (our muleteer) had prepared tea for us so we took a seat and soaked in our surroundings.

Continuing up we met what appeared to be rush hour in these parts, not sure we’ve seen so many goats in 1 place let alone at 2400m up. At our next stop we were made lunch, an epic salad and bread.

The path straightens out here and becomes more obvious, don’t be fooled by its lack of steepness for you have now reached the point where the air thins and the altitude starts to take effect. The effects of altitude vary so much from person to person it’s hard to say who will be affected but symptoms are often minor and get better with time spent at altitude.

A building appears in the distance up ahead, the refuge is in sight! The refuge is a simple place, brick built and bare walls but what do you want at 3200m. It had a bed, shower, loo and shop selling water, chocolate and other errr luxury items.

We waited the rest of the day out sunbathing on the roof of the refuge in awe of our surroundings. Pleased with our achievements for the day we looked towards the route for tomorrow, clearly visible and slightly daunting. Oh well, more tea and biscuits!

Monday today, summit day! Up early in the dark, breakfast and off up the mountain. A slow steady pace set as we begin the ascent into the large cwm and boulder field. The terrain reminded me a lot of Hollow Stones on Scafell Pike but on a much MUCH grander scale.

A ridgeline became visible ahead with tiny people on it. That was the route ahead. The fading shadow chasing us as the sun began to rise above the mountain tops made for incredible views looking back down to the refuge now just a speck below.

Hitting the saddle before the final push you suddenly get a sense of the sheer size of the mountain. The last push was tough, the altitude now nearing 4,000m, scree underfoot and the odd craggy step but all of a sudden in the distance across a huge drop the summit pyramid was in sight.

The summit is bigger than you’d think but does have some impressive drops on several sides and the views are impressive throughout all 360 degrees.

Pictures, a rest, a moment to take it all in and it was time to be thinking about making a move. The cloud building in the distance and in the valleys below also gave a little urgency about getting moving again. No one likes to get wet.

Dropping into the cloud we arrived back at the refuge after a long descent and our muleteer brought out lunch. The refuge now shrouded in cloud and fog gave an eerie feeling and although not planned we decided to continue back down to the gite in Aroumd.

Knowing the path having ascended on it the day before we were confident that we could be at the gite in around 2 and a half to 3 hours and we would get a much better nights sleep.

Our muleteer raced ahead to prepare our evening meal, cous cous with chicken and veg. Perfect after a day on the hill.

The weather had cleared the following day and we descended the track we had walked that night in the dark after being dropped off. It felt like a lifetime ago and as we passed early morning trekkers heading towards the refuge we were reminded of the achievement of conquering the highest peak in northern Africa – Jebel Toubkal!

Join us on a trip to Africas highest Peak! 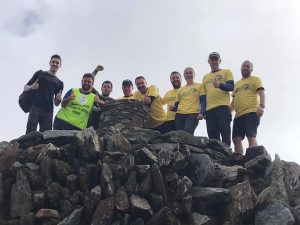 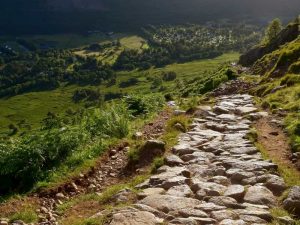 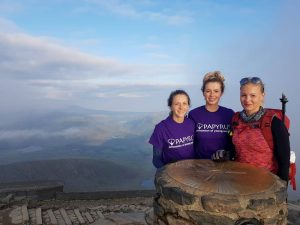 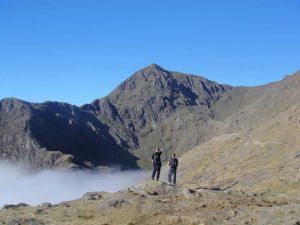 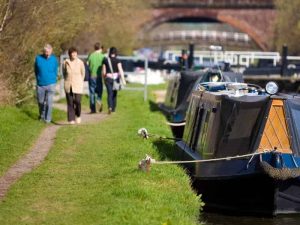